I recently visited Beachwood BBQ in Seal Beach for breakfast and was very impressed!  Located on Main Street in the quaint city of Seal Beach on a sunny summer day, the street was full of crowds and I was lucky enough to snag a spot for 2 not too far from the window.

Something that stood out to me on the breakfast menu was the unique coffee selections that included several styles I had never tried before.  All coffee at Beachwood BBQ is roasted by Thunderking Brewing Company which is located locally in Costa Mesa, California. Prepared with all organic coffee beans, there were both single serve French Press options, as well Nitro Cold Brew on draft and Drip coffee.  I selected the single French Press, PMA Positive Morning Attitude, a medium to light blend coffee to share with my husband as you brew this coffee at your own table and it is priced per person. I had never brewed my own French Press coffee before, so it was a fascinating experience! 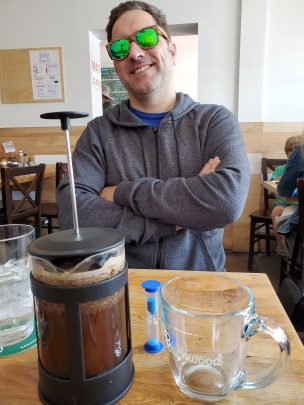 The first dish to arrive at our table was the fried chicken and churros topped with 63°C eggs.  Rather than the traditional dish, Fried Chicken and Waffles, this one had a unique difference using churros in place of waffles and it was out of this world!  I loved this dish as the chicken was nice and moist with a crunchy breading that went perfectly with the sugar on the churros and it was served with tasty pecan brown butter syrup filled with pecans.  There was also a side of homemade gravy to add more of a savory blend to the dish.  This plate was delicious!

My hubby opted for the Wild boar country fried steak topped with 63°C eggs, hot link country gravy, watercress and served with a crispy Kennebec potato. This dish was very flavorful and filling. My husband did end up taking half of this dish home as we had one other small dish to share.

The last dish we had was the house smoked salmon which was amazing! This dish included potato & celery root latkes, fennel lemon cream cheese, mustard greens, shaved red onion, pickled egg, and tomato marmalade. I could eat this dish regularly as the flavors blended perfectly and it brought memories of my childhood when my mom would make potato latkes (pancakes) for my brother and I as kids. If they sold the fennel lemon cream cheese, I would take some of it home with me!

Beachwood BBQ was one of my favorite places I have visited for breakfast this year. This restaurant had a unique style and used all high-quality ingredients.  I do plan to go back for breakfast again and I would love to check out their dinner.

Beachwood BBQ is located at 131 ½ Main St. in Seal Beach and there are 2 other locations in Huntington Beach and Long Beach as well as a new Blendery Tap Room that recently opened in Long Beach.   Have you ever been to Beachwood BBQ?  What were your favorite items?