The 2017 Golden Foodie Awards will be happening at a new location this year!  The festivities will take place at the Newport Beach Marriott Hotel & Spa at the address: 900 Newport Center Dr. Newport Beach, CA 92660 and I am super excited to attend!  Each year this event is a blast as it showcases the culinary creations of Orange County, California. 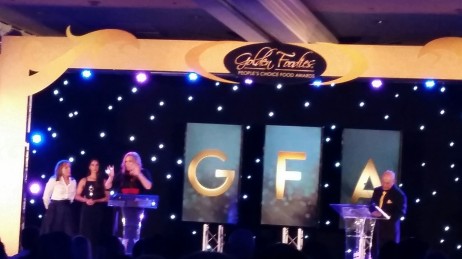 The 6th Annual Golden Foodie Awards, also known as “The People’s Choice Food Awards” is a red carpet event which celebrates the local culinary industry with a fabulous celebration of food, libations and friends!  Every year this event is a raging success and is the main foodie event in Orange County as the top chefs, mixologists and more in the culinary industry get to win awards for their fabulous culinary creativity!  This truly is the biggest foodie party of the year and once again they will share their decadent creations with all of us! Prepare to take part in delicious debauchery of the best food and drinks in town! 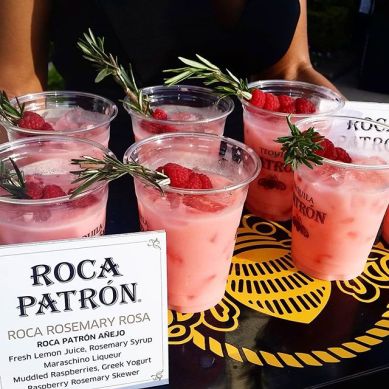 Ketel One Anyone – Golden Foodie Awards 2015

The event will begin promptly at 5pm.  Until 6:30 guests will enjoy incredible food and drinks from some of Orange County’s favorite restaurants. There will be wines from Bouchaine and cocktails from Ketel One, Patron and Maker’s Mark. 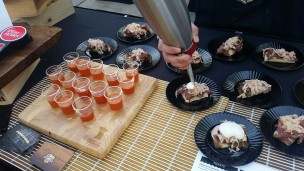 At 6:30 everyone will head in to the ballroom for an exciting awards ceremony hosted by Simon Majumdar. Tables will be decorated with wine, champagne, desserts, savory snacks by Sadie Rose and fresh fruit & nuts by Melissa’s Produce. 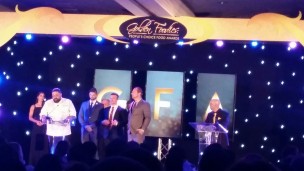 The After Party will take place until 11pm in the Garden of Eden Lounge. There will be 4 different areas to enjoy featuring DCS & Ketel One, Patron, Maker’s Mark and a special treat featuring a PB & J Bar by Sadie Rose, Coffee by Kean and Ice-Cream Sammiches by Chunk-n-Chip!

With our friends enjoying bites and libations – Golden Foodie Awards 2015 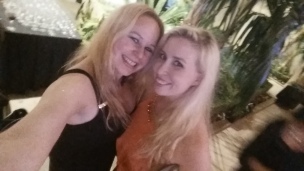 My friend, Catherine and I – Golden Foodie Awards 2015

Both valet and self parking are available and of course, Uber or Lyft are always an option as well. Please make sure to have a safe ride arranged after taking advantage of libations at this lavish event!

The Golden Foodie Award’s are for guests 21 and over only and is Black Tie / Cocktail Attire.

My love and I at the 2015 Golden Foodie Awards 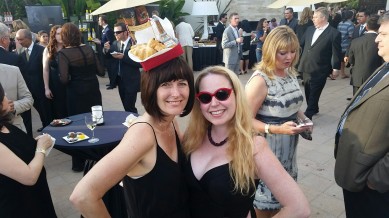 Cuisine for the Golden Foodie Awards this year will be provided by:

Hubby and I with our buddy, Tony – Golden Foodie Awards 2015

Red carpet reception wines will be provided by:

Libations will be provided by:

On Sunday, September 24, 2017 the Sixth Annual Golden Foodie Awards will happen at the Newport Beach Marriott Hotel & Spa. This beautiful red carpet event will celebrate the local culinary industry with a fabulous celebration of food, libations and friends.  I truly hope to see you there as this one of my favorite events of the year!  Stay tuned for photos of this amazing celebration on my social media the day of the party as well as the day after, as well as the lineup of the Golden Foodie winners!