Upon being invited to the Encore Dinner Theater in Tustin, California 2 weeks ago, I was remembering when I first started dating my husband because he had taken me to this specific dinner theater 12 years ago. It was formerly called, “Elizabeth Howard’s Curtain Call Theater.” From 1959-1976, the theater was simply a movie theater.  In 1978 the building was remodeled into a dinner theater and was called the Cabaret Theater.  Soon after in 1980, The Curtain Call Group took it over

and the theater ran successfully for 25 years.  I was there in 2001, so I was excited to see the changes that took place since the complete remodel occurred in 2011. The new theater was remodeled after the Metropolitan Opera in New York City. See their website here for more details: Encore Dinner Theater And Club

We attended a very funny show called, “Rumors” written by Neil Simon with our friends 2 Fridays ago.:)  Tickets include your meal and show and range between $25 & $80..One little secret I will share as well is that if you check out the facebook page for the Encore Dinner Theater, there are sometimes some awesome specials. 🙂 Most recently there was one for 25% off and a house bottle of wine…so make sure you check there.  Rumors truly cracked us up and the show flew by quickly.  The plot takes place in the house of one of the characters and the stories that are told

among the actors are hilarious…The actors continue to tell lie after lie until they are forced to tell the truth…Of course it is way more involved than that, but I don’t want to give the whole story away.:) 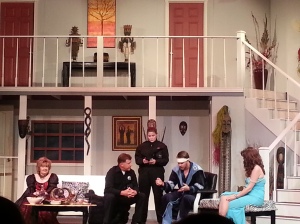 Shows are always changing regularly at the Encore Theater to stay current and give people the opportunity to see new performances. Although Rumors is now over, shows to come include Henry Prego Sings Frank Sinatra, Andy DiMino’s Dean Martin Tribute, Martin Anthony Tribute to Elvis Presley and Fiddler on the Roof! Ironically, Fiddler on the Roof was the play my husband and I saw years ago when we came to the theater on one of our first 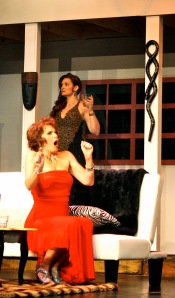 dates!  Prices for tickets range from $25 – $80 depending upon if it is a lunch or dinner performance, as well as which specific performance is attended. 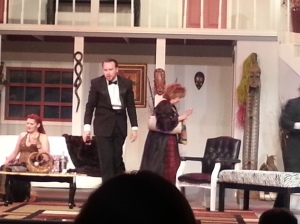 The food was definitely not too shabby either.  I had the chicken which was absolutely amazing in that it was a large portion and it was quite tender.  My husband’s short rib was pretty amazing, but in my opinion it was a bit too small. For desert, we tried the Carrot Cake and the Red Velvet Cake. Both desserts were fabulous! For more thorough details about just the food at the Encore Theater visit my husband’s blog, Tom’s Foodie Blog.

To subscribe to my blog to get weekly deals like these and other dynamic ways to save and to live champagne dreams on a beer budget, simply scroll down & enter your email address where it says to follow blog via email. You will then receive an email asking you to confirm subscription. Simply confirm subscription and you will be subscribed. 🙂 Thank you for your time and feel free to spread the word to others that want to learn all different kinds of ways to save money on food, travel, shopping, and products:) Please feel free to like my facebook page, Dani’s Decadent Deals as well to get daily deals everyday for everything from clothing deals, travel deals, restaurant deals, activities, adult events and kids’ events. 🙂 Have fun saving!!!