Last May/June 2015 we went to visit France and Italy to celebrate our 10 year wedding anniversary and to renew our wedding vows in Tuscany at a winery. It was a fun filled exciting trip that was full of many adventures.  One of my dreams came true on that trip and I had the opportunity to visit Disneyland Paris!

As an avid Disney fan and a passholder here in California at the original Disneyland Park, I am always interested to see what the Disney imagineers have to offer in other Disney destinations. I have been to Walt Disney World in Florida three times to all four Disney Parks (twice in my adult life and once as a small child) and the magic there is quite amazing as well! Stay tuned for that article in the future about that…:)

My husband and I have been passholders at Disneyland California & California Adventure for almost 15 years (see Annual Pass articles here for prices and best deals for Disneyland ARTICLE 1 & ARTICLE 2) and we still continue to enjoy the magical moments we share each time we visit the parks. We have no children, yet we feel the Disney magic just as we did as children every time we arrive! It truly is our happy place!

When we first decided to take our anniversary trip, it was based all around going to Italy.  Paris was an afterthought and I am so thankful that we added it to our itinerary. We love the city of Paris, France and have visited both there and Nice, France in the past, but we had never made the trip to Marne-la-Vallée, France before where the Disneyland Paris location comes alive!

Upon arrival at the Charles De Gaulle airport in Paris, France we did go through a difficult struggle in the airport of figuring out how to get to the Disneyland resort.  I do recommend that if you head to Paris Disneyland to make sure you have booked transportation to get there in advance if you are unfamiliar with the train system in the Paris airport. I recommend the Disneyland Paris Express bus (located downstairs) if you have never been because they are easy to find or if you are familiar with the airport and train station, the high speed train gets there really fast.  We went through a mad struggle and wasted 3 hours of our precious Disney time being tossed to different areas to chat with different attendants and it was very difficult to figure out the train route and which trains to take, as well as where to get them to get to the Disneyland Paris resort.

After much of a hassle I bought the most expensive option, which was a high speed train pass that was triple the price of the Disneyland resort bus or regular train that I could have taken had I not wasted mass quantities of time…When taking the high speed train or any other train for that matter, you will arrive at the train station which is located at the entrance to the Downtown Disney area and man oh man were we excited like 2 excited kids in a candy store!! Although we could store our luggage temporarily at the train station, we had been running on only 4 hours of sleep plus an overnight flight from Los Angeles to Paris, so we made our way over to the bus terminal to take a bus to our resort. These were pretty easy to figure out as they were properly labeled, but as luck would have it, we got on the wrong bus and ended up on a one hour tour around the entire city of Marne le Valle, rather than the 10 minute commute to arrive at our hotel…Oh well, at least we made it! 🙂

Upon arriving at our hotel, Hotel l’Elysse Val d’Europe, we were quite impressed. The hotel was conveniently located with a free shuttle that could take us back and forth to the Disney Parks and there happened to be a mall across the street!  This hotel truly was a steal. At a price of a little over $100 US dollars a night, it was much more worth it than any of the resorts on the Disney property that were easily between $400- $1,500/ night.  This hotel literally is perfect!!

We went up to our room really quick after checking in and we found it to be quite spacious in comparison to European hotels we have stayed at in the past. After a quick 1.5 hour nap, we were ready to charge into Disneyland Paris to tackle the park. Full of bursting excitement, we happily made our way over to Disneyland on the 5-10 minute bus ride happy as two peas in a pod. After a countless number of pictures at every landmark and entrance possible, we finally entered main street USA in France!!  It was so awesome!

We arrived for the spring festivities at Disneyland Paris, being that it was the end of May and the décor they had on Main Street was absolutely beautiful!  There were spring parades a plenty, gorgeous floral décor, and the arrangement of all things Main Street was slightly different in Paris in comparison to California and they had this awesome arcade of a variety of different stores to go shopping hidden behind Main Street on both sides!

Upon entry of the arcade (which I thought was going to be video games, not shopping) I found it fascinating to check out all of the Disney art work that had its own unique European flare!  I am so used to the same standard posters at our entry in Disneyland California, that it was so cool to see a variety of new posters created by the Disney imagineers!

After becoming mesmerized on Main Street and ordering a Croque Madame Sandwich in the café along with a French Croissant where I would regularly only be able to get a cheeseburger and French fries, we continued on our journey!

Another awesome thing we noticed on Main Street in Paris Disneyland was that the Gibson Girl ice cream shop we know and love on Main Street at home sells Ben & Jerry’s Ice Cream and in California it is Dreyer’s ice cream. We thought that was pretty cool! I wish our Disney Park would change it to Ben & Jerry’s so we can have more flavor variety!

So this article is not overly lengthy, I have broken this up in several parts.  See PART 2 to read about our discoveries in the castle, under the castle, and the shows and parades!  This article will be out within the next week! Have you ever been to Disneyland Paris? What were your favorite attractions there? 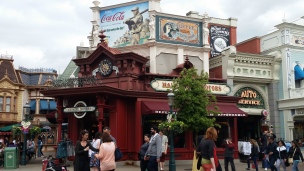 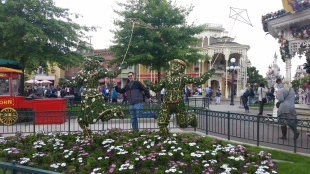 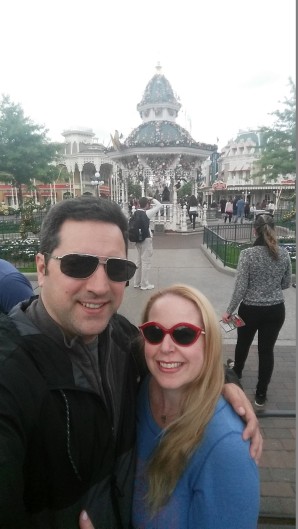 With my love on Main Street – Disneyland Paris

Entrance to the Disney Village aka Downtown Disney 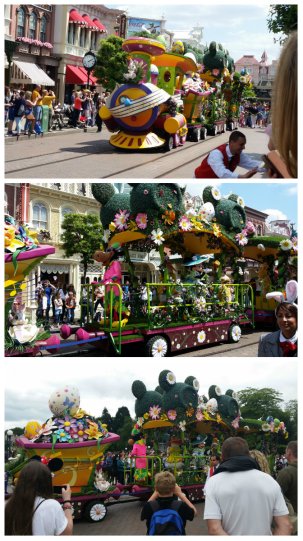